Mark Knopfler has his own distinct opinion regarding the lawsuit intended by the music industry against Napster and the shops selling bootlegs:

"I am against this lawsuit. It was said TV would be the end of cinema, it was said tapes would kill records and CD burners would kill CD's, but that's not true. Technology will always progress. The only real danger comes from countries which practise industrial piracy. I've always encouraged the recordings of my concerts. From the stage I had fun seeing all those little red lights of recorders and these microphones hold by fans. That's no danger and even quite cool. Fans who buy bootlegs already own all the official albums anyway. They do us no harm and I find these raids against bootlegs shops ridiculous." 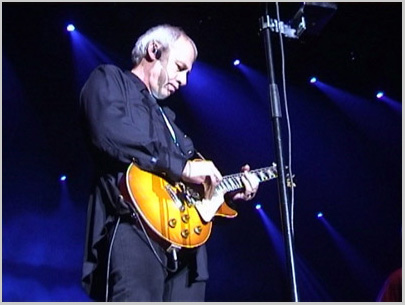 Mark during a concert at the Heineken Music Hall (Amsterdam, The Netherlands), 17th June 2001.
I am sure that at least one fan made a bootleg this evening (Sailing to Amsterdam 2001)